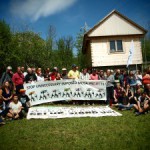 The fourth international forum against useless imposed megaprojects was held in Roșia Montană (Romania) between 8th and 11th of May, 2014. This place was chosen because it is the site of a fight against a highly destructive gold mining proposal and we stand in solidarity with their fight. Over twenty groups struggling against equally destructive megaprojects from all over the world attended the forum. The participants restated the continuity of their struggles and reaffirmed their commitment to the Charters of Hendaye (2010), Val de Suze (2011), Notre Dame des Landes (2012), Stuttgart (2013), as well as the Charter issued during the World Social Forum in Tunis (2013).

This fourth forum provided the occasion to expand the range of issues discussed, such as exploitation of shale gas. There are more and more struggles facing the same issues. We recognised that we are all facing state repression and we reject the criminalisation of activists. The discussions led to the deepening of thinking about the relationship between politics and social movements. The participants unanimously condemned the trade agreements  between USA and the European Union and Canada and the European Union (TTIP and CETA). Our determination to pursue our struggles is intact and we are still fully committed to strenghtening our network and sharing the resources of activists such as the WIKA translation group, the newly created website or common maps. This network will enable us to successfully fight against all the megaprojects and to build a world of equality and solidarity.

Every forum is also a place where we can experience new ways of living collectively and increase our level of consciousness.

We, as movements that fight against UIMP, encourage people to act. Therefore, our message to communities is: GET UP, STAND UP!